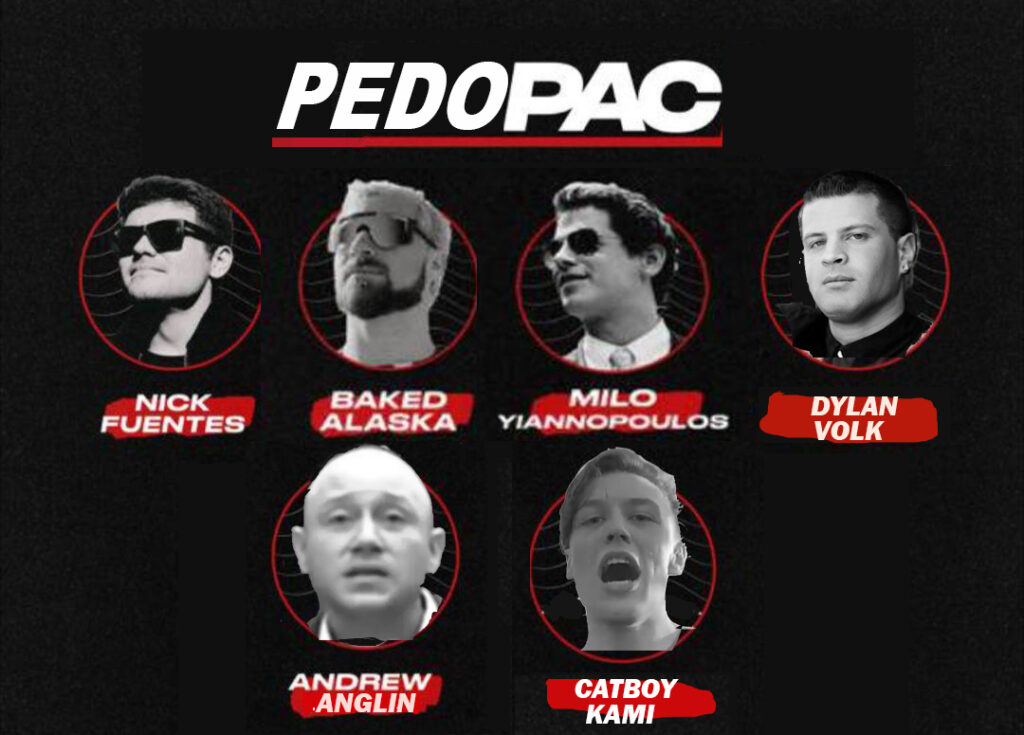 (UPDATE: 8/18/22) Groyper General Alejandro Richard Velasquez Gomez, aka “Latino Zoomer”, (pictured below) was just charged with possession of child pornography. Fuentes had previously stated that he “loves” Latino Zoomer and defended him against allegations related to the grooming of a 13 year old child. 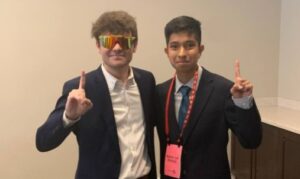 According to America First activists Fuentes and Anthime Gionet (aka “Baked Alaska”) the only thing immoral about sexual contact between “much older men” and underage girls is if its done outside of wedlock. Fuentes tells his audience that sex with young girls “past the point of puberty” is fine but should be done in marriage. For reference, girls typically reach puberty between the ages of 8 and 13 years old.

Marriage to very young brides is still practiced in some parts of the world, like Afghanistan.

When allegations arose that America First aligned Congressman Matt Gaetz had paid for sex with a minor and was under investigation for sex trafficking, Fuentes lept to his defense. “17 years old? What is even the big deal,” he wrote on March 30, 2021. But it wasn’t the first time Fuentes had argued against age of consent laws. His arguments for sexual intercourse would include children much lower than 17.

The November 10, 2017 broadcast of “America First” was titled “Roy Moore Did Nothing Wrong” in reference to allegations that Judge Roy Moore, an Alabama senate candidate, had sexual relationships with a number of underage girls, including one who was just 14 years old when he was 32.

Accuser Leigh Corfman alleged that when she was 14 years old Moore removed her clothing and stripped to his white underwear before molesting her and trying to get her to touch him.

In total, 8 women came forward with assault allegations, 6 of whom were underage at the time.

Fuentes argued that “the whole age of consent thing is just a social construct.” He implied that because some American states have age of consent at 18, others at 17, or even 16 and some foreign countries even lower than that (Nigeria is the lowest at 11) therefore age of consent is just arbitrary. In his view, puberty should be the standard in determining. whether someone is a “grown adult.”

“Do we really believe that you have to be 18 years old to consent to sex otherwise its rape? Are we really supposed to believe that people, adults, grown adults who are passed the point of puberty engage in a relationship and that becomes a rape?”

On another broadcast, defending the Gaetz allegations Fuentes said, “Maybe we as a society need to reconsider what constitutes moral sexuality. Because we live in a society where age of consent law is the gospel.”

”If you violate that, ‘Crucify the man!’ Female teachers are having sex with middle school boys all the time, nobody cares about that. But its, uh, a large age gap between an older man and a younger woman, God forbid.”

Nick Fuentes – Nothing Immoral About Sex With Underage Children

On one broadcast of his show, Fuentes waxed profusely about the attractiveness of 15 year old Tik Tok star Charli D’Amelio. Fuentes was 22 years old at the time. When he wasn’t aware that she was underage he seemed unenthusiastic about her attractiveness (“She’s pretty don’t get me wrong. But this is not someone that I’m like, “Whoa! This is a knockout!”). But after learning she was only 15 became much more attracted to the girl and aggressive in insisting, “Charli D’Amelio: HOT! I’m just gonna say it….She’s hot!”

Disturbing beliefs about underage sex are common among Fuentes’ inner circle. Baked Alaska, for instance, echoed his sentiment that, “Roy Moore Did Nothing Wrong. ”

On another occasion Baked Alaska hit on a 13 year old girl, asking for her phone number. He joked that he’d “grab her by the pussy” and cupped his hands as if to grope her breasts.

On one livestream in 2021, Baked Alaska went to the bar with his friend “Chaggot”, a former employee of AFPAC 3 speaker Jesse Lee Peterson and an AFPAC 2 attendee who claims to speak with Fuentes daily. “Chaggot” (real name Dylan Volk) is a self-admitted pedophile who had sex with a 13 year old girl when he was an 18 year old adult. During the broadcast, the two wander around the streets asking random passerby whether or not it was immoral for “Chaggot” to sleep with the 13 year old.

Anthime Gionet, better known as Baked Alaska, streamed himself with his friend "Chaggot" asking people what they thought of Chaggot sleeping with a 13-year-old when he was 18. pic.twitter.com/jC2hj34y2a

Baked Alaska himself defends the man stating, “I don’t think that you’re a pedophile” and insisting the only thing immoral about the sexual act was premarital sex.

During the stream Baked Alaska promises to defend “Chaggot’s” actions to the livestream audience. “We’re backing you up. We said you’re not a pedo. You didn’t molest anyone.”

A streamer known as “Woozuh” jumps in and tells the viewers on his stream that, “Its not rape, child molestation, pedophilia. That is messed up that you would frame it like that.” Woozuh is yet another “special guest” listed on the AFPAC 3 poster.

Fuentes’ friend Tor Gustafsson Brookes, aka “Lolisocks”, aka “Catboy Kami” has repeatedly faced accusations of pedophilia and attraction to children. Kami is a streamer from Australia who is part of the flamboyantly homoerotic “catboi” and weeaboo cultures. He brought a lot of criticism onto Fuentes in January 2020 when a video surfaced of the two men on an intimate outing around the town. Many accused the two of being lovers (which Fuentes has denied). 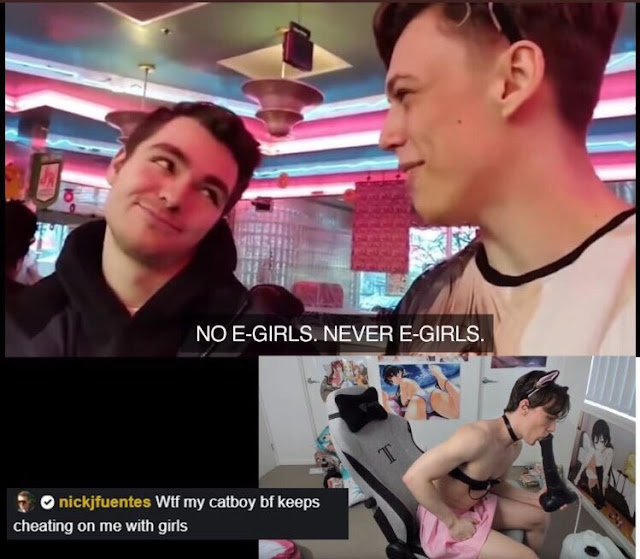 As part of the America First crew, Kami attended a November 2020 “Stop the Steal” rally in Arizona with Baked Alaska. Baked Alaska introduced him and cheered Kami on as he gave a speech calling Jews “rats in human form” before a crowd of MAGA faithful. Later Kami told a reporter, “I’m Catboy Kami and I hate niggers.” 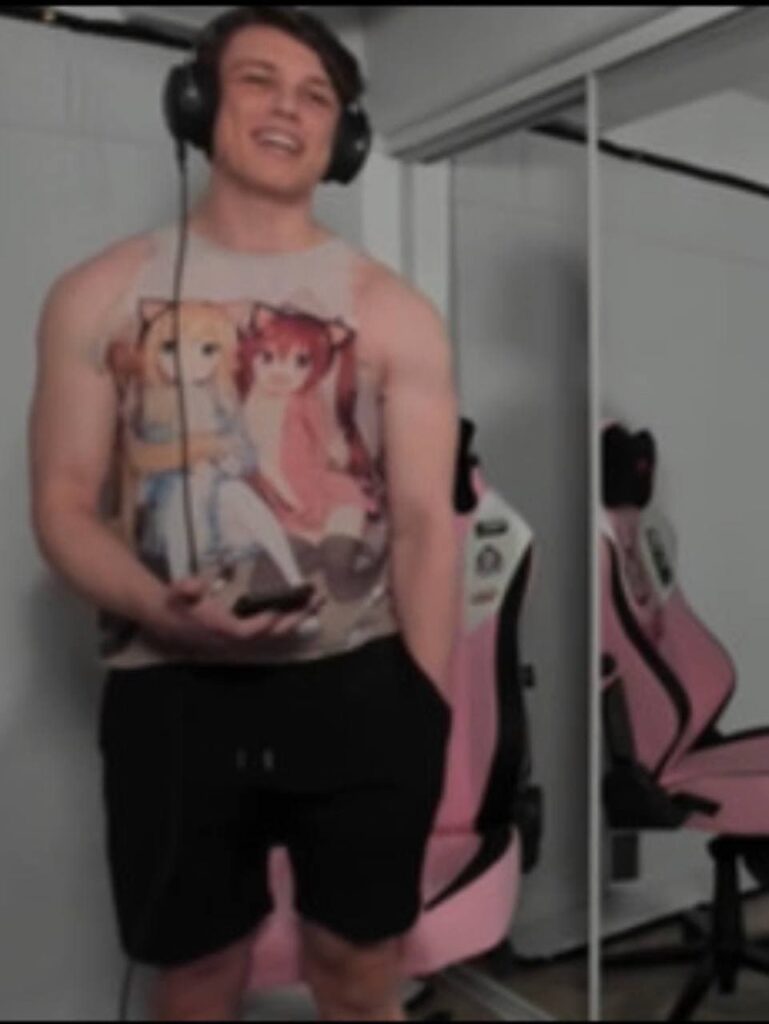 On several occasions Kami has admitted that he masturbates to illustrated images of children. (Timestamp: 13 minutes and 5 seconds)

On February 23, 2020, Kami tweeted, “People say I’m a pedophile for finding THIS attractive” along with an animated depiction of a prepubescent girl. He exhorted his haters “if you don’t think she’s hot…you’re gay as fuck.” 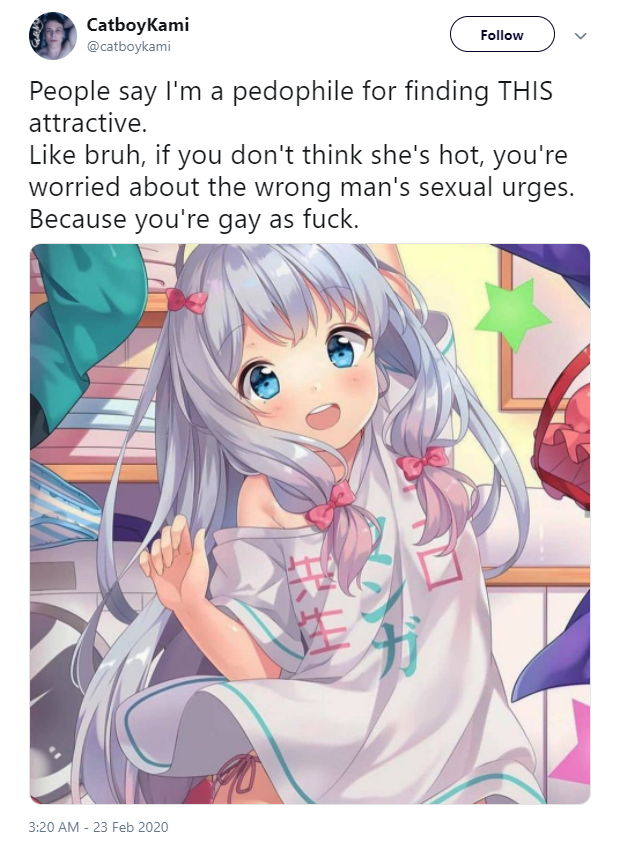 Kami has also tweeted about his belief that forced intercourse is not rape because, “Rape is not real.”

America First promoter Andrew Anglin was a big fan of Catboy Kami, calling him “the hero we deserve.” Anglin himself has had inappropriate relationships with underage girls as a sex tourist in the Philippines.

Andrew Anglin with his self-described “jailbait girlfriend” in the Philippines

Fuentes’ rise to prominence began in early 2018 with the patronage of Andrew Anglin and his Daily Stormer website, which has been described as the leading Neo-Nazi website on the internet. In a February 23, 2018 post Anglin wrote, “Understand this, friends: Nick Fuentes and Paul Nehlen are giving us the model for the future of the pro-white, anti-Jewish movement. I am officially declaring that.” And, “It’s CPAC day. And that means Nick Fuentes is murdering Jews.”

Fuentes communicates about Anglin using coded language, as he did on the November 5, 2019 broadcast of America First saying, “I know that (Anglin) has been very supportive,” Fuentes said in response to a viewer question. “And I appreciate that … I really do appreciate his support.”

Some might also point to Fuentes’ association with Milo Yiannopoulos, a key America First ally and featured speaker at AFPAC 3.

In the context of being molested as a boy by his Catholic priest, Yiannopoulos defended homosexual pedophilia, “In the homosexual world, particularly, some of those relationships between younger boys and older men — the sort of ‘coming of age’ relationships — the relationships in which those older men help those young boys to discover who they are and give them security and safety and provide them with love and a reliable sort of rock.”

The saga of disgraced pedophile Jeffrey Epstein, who introduced famous men to very young girls, has been a fixation of the Right for years. Alex Jones has used it as proof to vindicate his salacious theories about pedophile rings among the elite. There are numerous clips of him shouting about “pedophile demons” as though this is a cause he cares very much about. 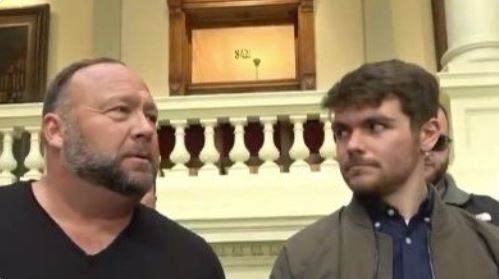 And yet Jones, and a large segment of the American Right, are getting in bed (so to speak) with this clique who are justifying the sexual abuse of young girls and in some cases acting on it. The house should be cleaned of pedophiles and their apologists or figures like Alex Jones are nothing more than enabling hypocrites.

Jason Kessler is an independent journalist. If you appreciate this content, please consider making a donation to making this work possible.